Which Carriers Increased Their Rates? 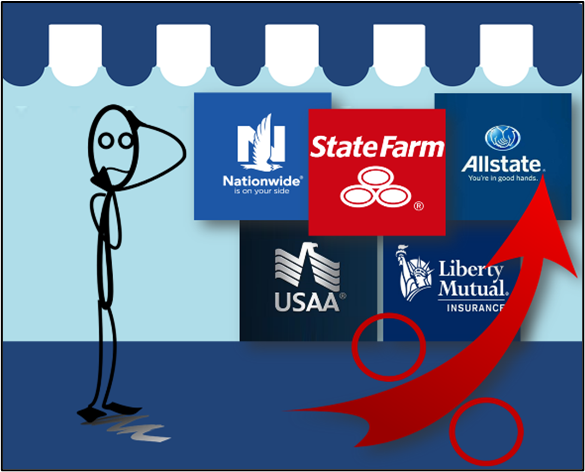 Almost all the well-known carriers increased their rates in 2022, and that will likely happen again in 2023.  GEICO led the pack with the largest total rate increases.  State Farm followed closely behind, along with Allstate, USAA, and Liberty Mutual.  If you’re insured by Progressive, you were in luck because they were the only carrier to decrease its rates in 2022.

GEICO and its affiliates received regulatory approvals for 27 rate increases across seven states in June 2022 alone.  More than half of those came from Virginia where regulators signed off on six altogether.

State Farm, the largest private auto carrier in the US, continued its trend of increasing rates by securing 17 hikes in June 2022 as well.

To justify those rate increases, Gina Morss-Fischer, a State Farm spokeswoman, said that increases in accident frequency and severity are driving up the cost of settling claims.  Precisely, “As more people are on the roads, we’re seeing an increase in claims.  Auto claim costs are being compounded by record inflation and supply chain disruptions.  All of this has increased the cost of labor and materials, which translates to higher auto repair costs.”

According to Repairer Driven News, since the start of 2022, Allstate implemented 72 rate increases averaging 10.3% across 51 locations.  Those rate increases totaled $777 million last August and amassed to $2.5 billion last September.

Mallory Vasquez, an Allstate spokeswoman, said, “We evaluate the frequency and severity of accidents at a state level.  Beyond inflation, some of the factors driving losses up in Illinois are the same things impacting the rest of the country: miles driven have gone back up to pre-pandemic levels; vehicle collisions are more severe; speed of driving; and distracted driving.  Illinois is [also] one of the top states for vehicle theft.”

Nevertheless, even with those rate increases, here are the average costs of car insurance by carrier:

Does this surprise you?  Are you bothered by how much your carrier is charging you?  If so, hit us up directly!

Why Did My Auto Insurance Increase?

Rates have been rising for nearly every necessary household cost, and auto insurance hasn’t escaped this.

Which Insurance Companies' Rates Have Risen .... and Why?

Almost all the well-known insurance companies began increasing their rates in 2022.

Why Did My Insurance Rate Increase in My State?

Why Did My Hazard Insurance Increase?

When you’re renewing your homeowner’s premium, you might find yourself asking, “Why did my hazard insurance increase?”

Proof of Insurance Requirements by State

Since insurance is regulated state-by-state, not federally, different states have different insurance requirements.

Lions and Tigers and Bears and Force-Placed Insurance – Oh My!

Lions and tigers and bears and force-placed insurance – oh my!

Company
AboutPartnersContactMy Dashboard
Resources
Why did my insurance increaseInsurance Verification(888) 621-2001help@woopinsuranceagency.com
About
Terms of ServicePrivacy PolicySecurity